We have integrated our event listings with Bilingualism Matters London. For an up-to-date list of events on bilingualism and multilingualism in the London area, please check here.

Older events and some on-going activities are archived below.

Is a multilingual and multicultural identity less integrated in a society?

The British Academy has awarded a Post-Doctoral Fellowship to Dr. Alex Panicacci (Queen Mary University of London, University of Washington) to carry out a research project entitled Is a multilingual and multicultural identity less integrated in a society? This project aims to investigate how people commit to a sense of community within their linguistic, cultural, and racial diversity.

Politicians often make sweeping statements that construct diversity as loosening the ties of a common culture and a threat to a given nation and its citizens. This ‘othering’ strategies incite fear against diversity, promoting a narrative of xenophobia and encouraging patterns of discrimination.

This research focuses on intersectional identity practices, using statistical and ethnographic analyses to examine how socio-psychological and contextual factors link to linguistic, cultural, and racial diversity. Understanding how people reconcile multiple languages and cultures within their sense of self while still committing to shared values can empower communities, by fostering integration, belonging, and righteous inclusive dynamics. In the longer term, this will aid in the development of enhanced policies on migration, social rights, and welfare administration, aimed at reducing inequalities, promoting progress, and improving individuals’ socioeconomic and psychological well-being.

You can find more information here. Also, if you want to take part in this research you can fill in our anonymous survey here.

By engaging London communities, the purpose of this project is to produce a library of short illustrated films based on stories told by grandparents to their grandchildren. Some videos are available to watch here.

A major motivation for this project comes from our research and community work which has found a decline in heritage language use by young children in multilingual communities, and in turn reduced engagement with elder members who primarily speak the mother tongue. Through this initiative we aim to reconnect and increase cultural awareness across generations, as well as promote heritage language use within London communities.

More information can be found on the project website: Stories from Home

Languages in our Lives

Mile End Community Project held a free workshop in collaboration with Queen Mary’s Centre for Public Engagement on May 3 titled “Languages in Our Lives: The Joys and Struggles of Speaking Languages”. Professor  Devyani  Sharma and others facilitated the workshop. The description of the event together with some insights is presented below. Find out more by emailing hello@mileendcommunityproject.org or calling 07931 732 153.

Even though nearly a quarter of Londoners speak a main language other than English, it is very common in London for people to speak two languages or more.

“Why doesn’t my child speak better Bengali? Will it confuse them if I speak Polish to them at home? Will they do worse in school or have trouble fitting in?”

This workshop explored these questions and more through a short film screening, discussion and story telling to understand the languages we have in our lives. Local community members of all generations talked about the joys and struggles of being bilingual in London, whether with friends, family, at work, or in other situations. The project, currently underway, will create a series of short films and illustrated narratives that aim to promote heritage language use, as well as reconnect and increase cultural awareness across generations within the London Bangladeshi community. A major motivation for this project comes from McCarthy and Ruby’s research as well as the Special Education Needs Coordinators’ teaching experience, which has shown a decline in heritage language use by young children in the community, and in turn reduced engagement with elder members who primarily speak Sylheti. This is in part due to changes in the immediate family network, i.e. less traditional inter-generational living, and also local government cuts in mother tongue language classes. This language gap results in communication breakdown between the youngest and eldest members of the community. This impacts on two major aspects of development:

The films created in this project will be based on inter-generational workshops, where the project will create a ‘barrier free’ communication platform for the transfer of narratives from grandparents to their primary school-aged grandchildren, tapping into a key aspect of early language development. The project will capture historical events and folk tales that are considered to be a key part of Bangladeshi heritage, identity and cultural history.

The outcomes of the project will be presented in a series of workshops for early years coordinators in East London primary schools, with the aim to develop language-specific teaching materials for early reading skills.

When multilingualism is your mother tongue: the documentary Kanraxël and associated teaching resources

Last year we held a screening of the film Kanraxël with producer Anna Sowa and Professor Friederike Lüpke, who leads the research team behind the film. In case you missed the opportunity to catch the film the first time, another screening is taking place 18:00-20:30 on Tuesday 20 February at the Royal Anthropological Institute. Professor Lüpke will provide a brief introduction, followed by short presentations from Professor Devyani Sharma and users of the resources developed through the research project.

On the eve of world mother tongue day, we would like to take you on a journey to Agnack, at tiny village in the south of the West African country of Senegal… continue reading at the Royal Anthropological Institute event page. 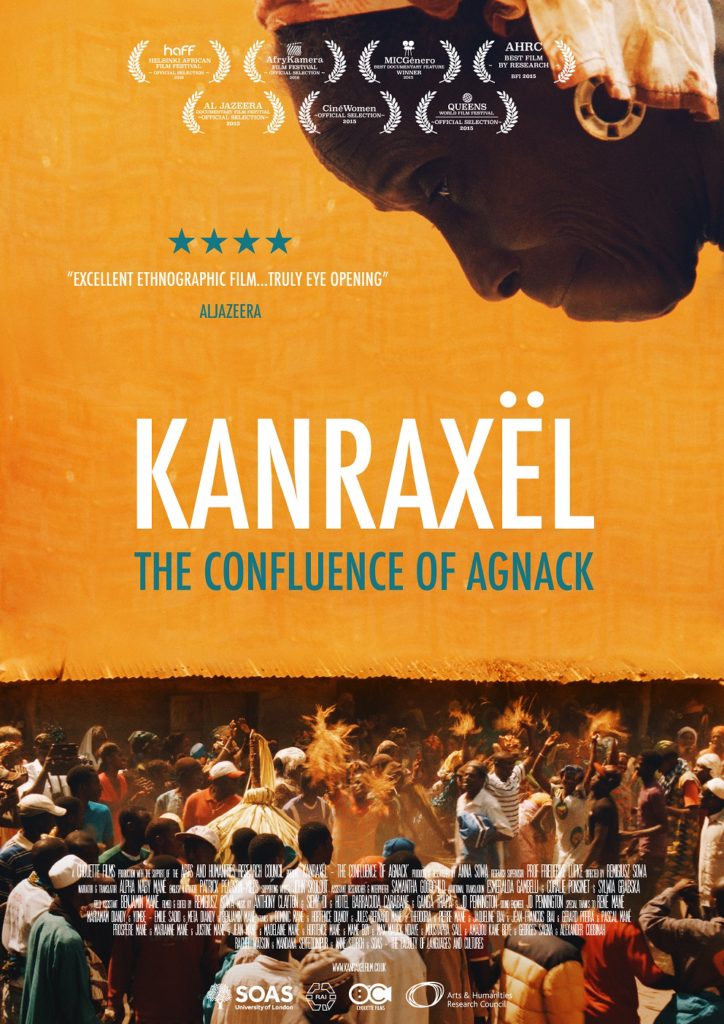 Bringing Together Worlds Apart: Multilingualism in London and Agnack

This free Multilingual Capital event which took place on 23 March 2017 involved a screening of the critically acclaimed film Kanraxël.

Agnack is a village in Southern Senegal where both rivers and people converge in the most stunning of ways – a place where it is considered perfectly normal to speak a minimum of six languages. For the first time in history the people of Agnack – the Baïnounk people – allowed cameras to film as they prepare for an unforgettable event and capture the mystery surrounding their rituals. The Baïnounk culture is more threatened now than at any point in its long history due to abrupt changes brought by colonisation, conflict, globalisation and migration.

Anna Sowa, producer of Kanraxël for Chouette Films, and Professor Friederike Lüpke, who leads the research team behind Kanraxël, talked about the making of the film, and research findings which have arisen alongside the film.

The event was introduced by a short talk from Dr Esther de Leeuw, who leads Multilingual Capital with Professor Devyani Sharma, and multilingual landscapes of East London were presented in relation to Agnack.

Esther de Leeuw delivered a keynote talk titled “Multilingual myths in the context of the 2011 Census” at a one-day multilingualism workshop at SOAS on 20 June 2013. More information is provided on SOAS event page.

Translation Games is an interdisciplinary, multi-platform project involving collaborations between languages students at Queen Mary University of London and King’s College London (KCL), as well as artists, textile designers, digital technologists, and researchers at  the School of Electronic Engineering and Computer Science (EECS) at Queen Mary (in particular the GHack collective). It is based around the concept of translation as a form of cultural difference that can create innovative new ways of exploring language learning, translation practices and digital and creative practices. Based on the game of Chinese Whispers, the team have created a complex ‘translation chain’, running a commissioned piece of short fiction through several language combinations, in addition to a ‘chain’ of artists and textile designers. The project has so far been funded by the King’s Cultural Institute and the KCL German Department. The lead collaborator at Queen Mary is Jenny Chamarette (Department of Film).

Multilingualism and literature in the classroom

This project involved a teachers’ workshop and a series of workshops with GCSE-level pupils from local schools, involving the participation of creative writers, around the theme of multilingualism and the study of literature. The project was also aimed at generating teaching resources, to be made accessible to any interested parties online. More information can be found on the QMUL project page.

Here are a few interesting initiatives and projects that might inspire others dealing with similar challenges in multilingual language use as well as cross-cultural engagement:

The format of this evening event followed popular programmes such as Question Time, with short talks followed by a panel discussion of questions submitted in advance by members of the audience.

The event was attended by over 75 people from a wide range of backgrounds, including students, researchers, interpreters, professionals with a personal or professional interest in multilingualism, educators, teachers, parents, and asylum and refugee workers.

Below is a playlist of video clips and PowerPoint presentations for several of the short talks as well as for the Q&A discussion.